The school year has started! On the way to the school Sara and I meet several children slogging to class, fullly stuffed backpacks on their back. A couple of boys shake my hand. We set up our equipment in the „Clasele Primare.“ In the near future, the school will have to close; 80 pupils are too few, grades are already being combined. For now, though, there are still things happening. Several small students giggle by the door, the very outgoing ones even stick their head into the room to see what we are doing. I open my laptop, Sara sets the camera on the tripod.

One of the teachers stands in the main entrance to make sure that the students try to stomp all of the dirt from their shoes before they enter the newly cleaned building. Yesterday evening and overnight there was quite a downpour. The roads to the excavation area are also very muddy, so muddy that excavations won‘t start today until 12. Until then, there are enough other things to do. A couple of students from the excavation come up to us in the school to bring Sara supplies and to work themselves: photos are sorted, total-station lists are split and organized, botanic samples are rebagged and examined briefly under the microscope. 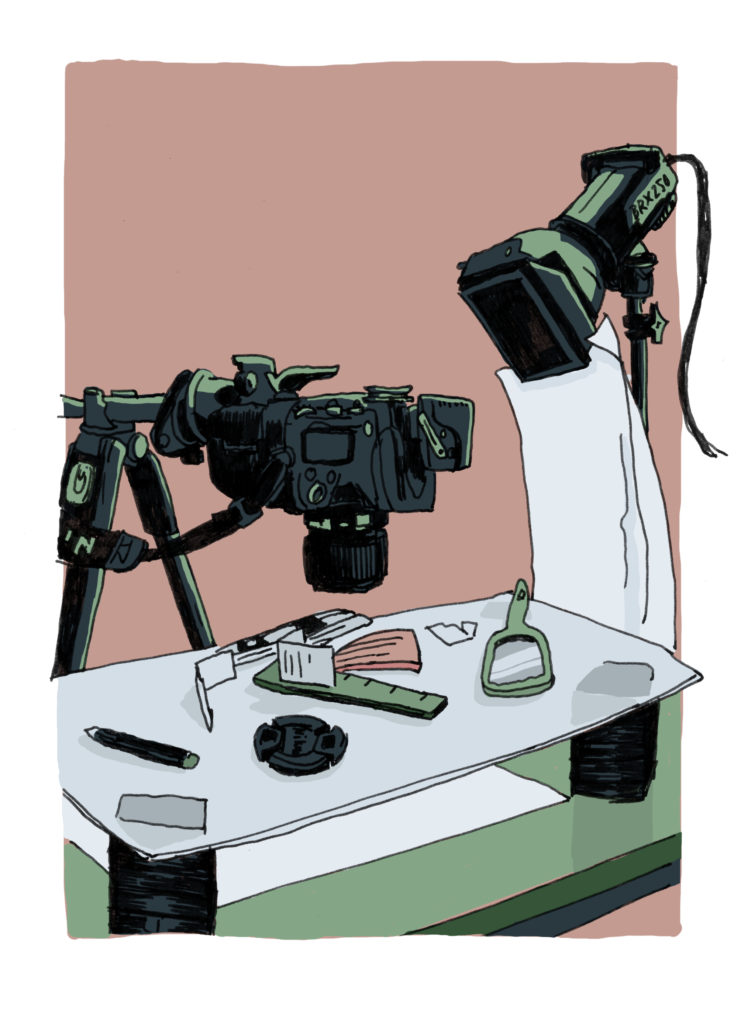 Sara is photographing the ceramic sherds. She has already spent the last week here in the school, first documenting the single finds, then the ceramics. All of the cool finds have passed beneath her lense: besides a couple of small figurines there are a large number of small clay balls that people describe as „Tokens“ as well as a larger clay ball that is partially decorated. No one can agree as to their functionn. Some people see toys, others a tool for animal husbandry.

The majority of these tokens are found outside of the settlement inside of a large, round magnetic anomalie that is visible as an area covered with calcium carbonate concretions, „small white flecks,“ almost a meter under the modern surface after excavation. 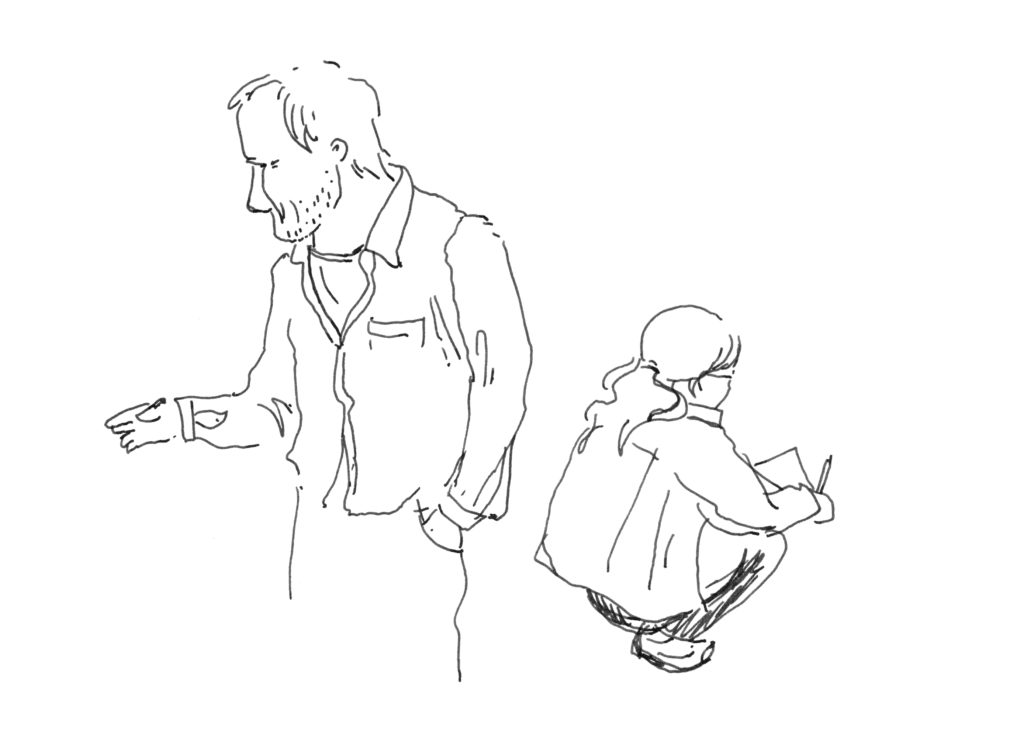 It’s good that we have had a geologist and geophysics specialists on board since Friday. When Stefan (the geologist) and Natalie (the geophysicist) were first shown the excavation on Saturday, of course neither could yet say much. „Filling of former cavities in the ground,“ hypothesizes Stefan. Why these cavities suddenly stop, but are also found underneath Kai’s ditch, remains unanswered. Stefan also does not yet want to answer Stas‘ question if these deposits could be the result of animal husbandry.

Besides broken ceramics and tokens, bones and bone tools were also found in this trench. This would fit very well with the animal husbandry hypothesis. That would be a strong support for the argument that the tokens represented a system of counting.

The students have driven back to the excavation house. Sara makes an espresso and shows me how ceramic rim sherds are photographed so that the rim makes a straight line. For publications, these types of photos would be supplemented with drawings to show the curvature of the shred. 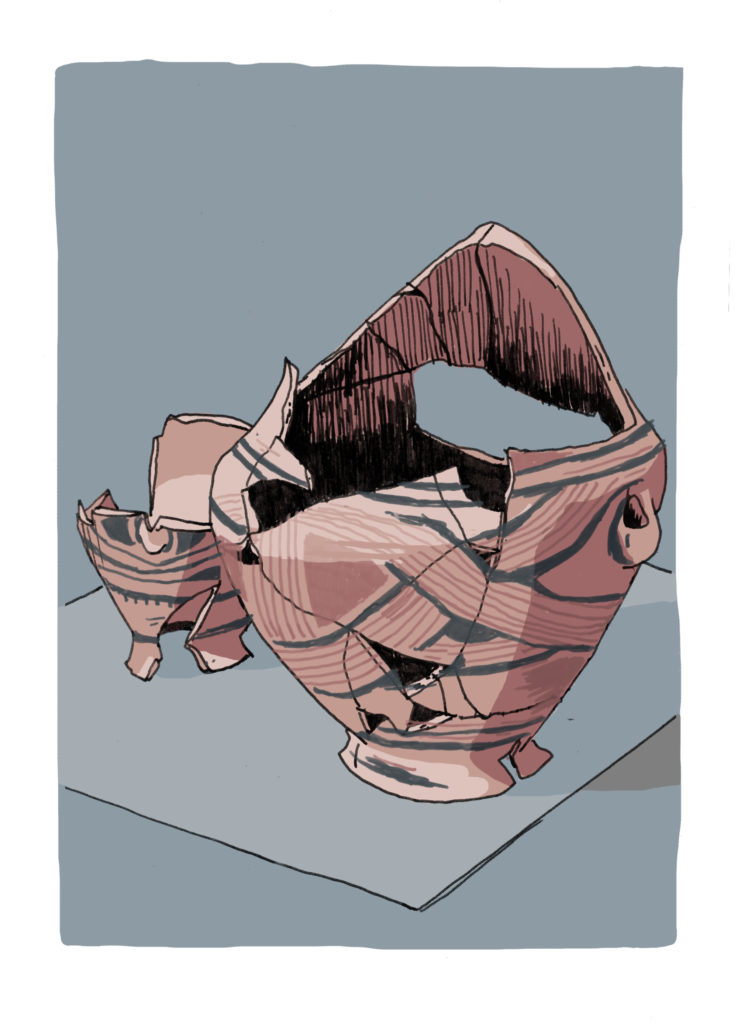 She has waited for the last day to photograph the large, partially pieced-together ceramic vessels that are placed upside down on the table in front of me. Partially because she has to completely set up the tripod and light for these photos and partially because they are the nicest to photograph. „Fewer annoying odds and ends,“ she says.

The shutter clicks. There’s a flash. She checks the photo on the display of the camera and takes a hand-held mirror so that she can re-direct the light onto the handle of the sherd. She looks again. Ok, better.

Outside it thunders. The rain has started up again.