After a detour to the market where we buy vegetables and cookies for the next week (although the cookies by far won’t last that long), we go to the excavation house. Naturally, we’re super punctual. Kai tells me that he would have liked to show me his profile yesterday, the colors werevery pretty. We’ll take a look today. Three guys are already waiting by his trench. „What should we do?,“ they ask. Kai says the ukranian word for „trowel,“ he doesn’t know the word for „brush.“ No problem, I quickly draw a brush. This they understand. 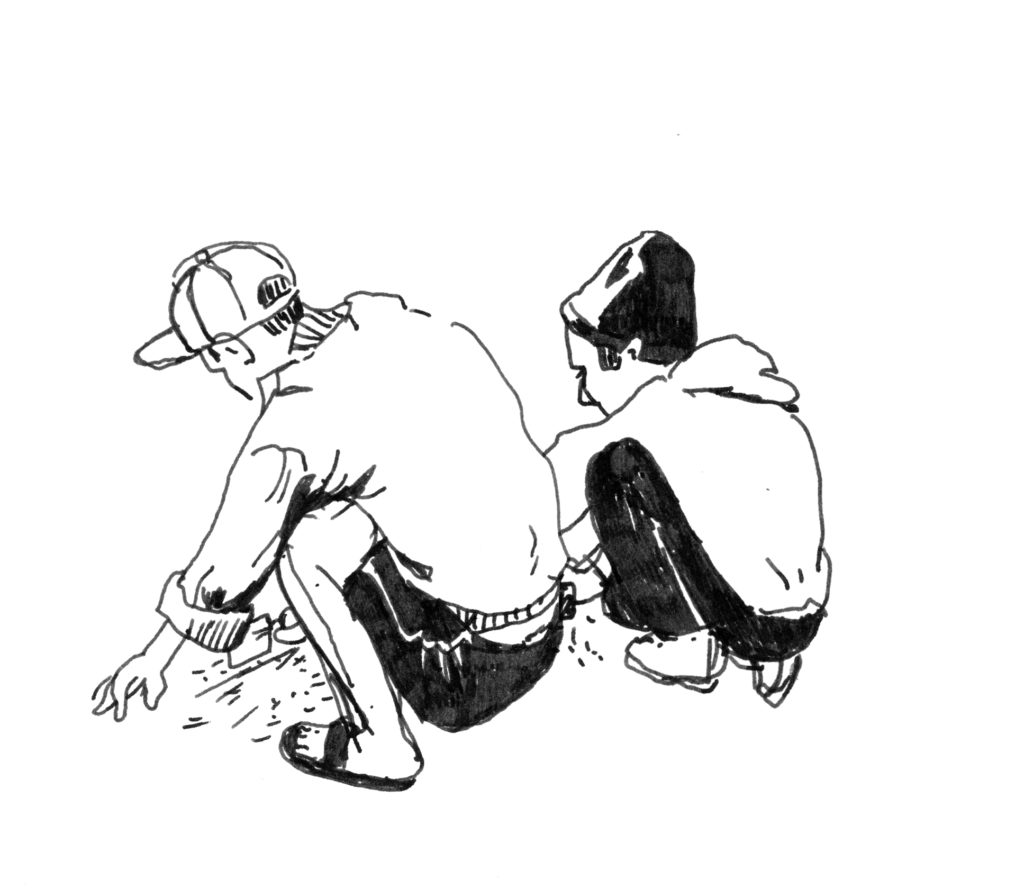 I start to ask Kai about his trench. „There’s not much to tell,“ he says. That’s not completely true. The outermost of the three ditches that encircle the settlement passes straight through his trench. He thinks that Stas is quite happy to have uncovered such an enclosure here. Typically similar settlements have only two ditches.

In the profile (the side wall) of Kai’s trench it is possible to see the form of the ditch quite clearly. At the very top, a dark 30cm deep layer used for modern farming and thus completely mixed annually by the plow is visible. A meter below, the color of the earth changes to a rich brown – the filling of the ditch, with a few isolated sherds sticking out almost horizontally. Because of this, it is possible to see how the different layers formed, each with sherds lying on top.

Underneath is a beige layer filled with white flecks of calcium carbonate and forming a bow – the base of the ditch. 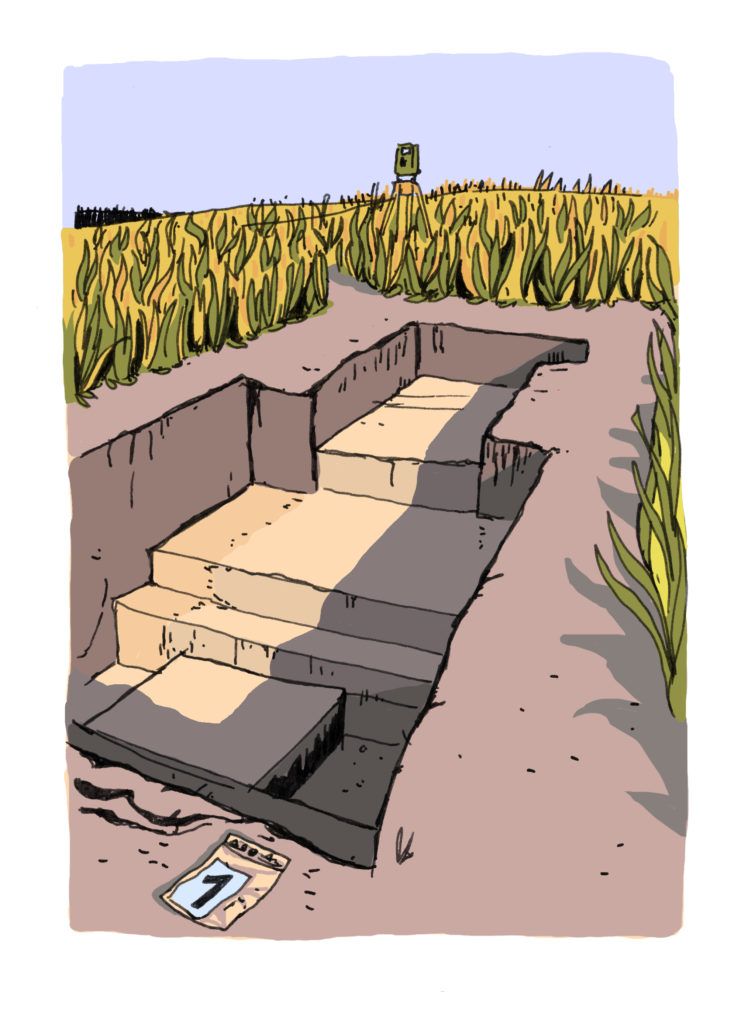 Kai gets a hold of a meter stick and measures the profile again. The deepest point is 150 centimeters beneath the modern surface. In the direction of the settlement, the ditch is angled much more flatly than in the direction towards the valley edge. „A flat-bottomed ditch, “ says Kai. „In this form rather useless as a system of defense.“ Overall, it does not seem that ditches here were used for the defense of settlements. Inside the triple-ring of ditches there are traces of some kind of palisade, though also not in the size that would suggest use as a fortification.

The ditches, thus, most have had a different function, possibly as settlement borders. He is not all that familiar with mythology, but he does manage to pull out Romulus‘ plow furrow around Rome and the following fratricide. A fixed city limit – he sees that here as well.

Right now, Kai does not know if this multi-ditch settlement boundary was dug before the construction of the houses, after, or during. Of course that would be very interesting with respect to the development of the settlement and, followingly, of demography. For more specifics Kai says that I have to ask Stas. Maybe the finds from last year have already been examined. Last year the ditch was also excavated and amphorae sherds from the 2nd century BC were found. It seems that the Romans used this place, or a part of the ditch, at least once. With such a multi-periodicity in a site a lot of things get mixed up – who knows what the Romans organized here. That’s why a new trench was laid over this part of the ditch which had rested undisturbed for 6000 years. Here, everything remains, layer-by-layer exactly as it was originally filled.

In and around the ditches numerous animal bones, in particular long bones of cattle, were found that were quite well preserved due to their size. In their epiphyses lies the valuable collagen necessary for dating. „The task here is complete,“ says Kai. „Now the bones just have to go to the lab.“

Meanwhile, the workers have finished carefully scraping part of the sediment as flat as possilbe and sweeping it. „Carago, dobre,“ says Kai. The guys can go to Andrea to work further.

After Kai fishes out three frogs that had met their doom last night in his trench, he prepares the profile for photgraphing. He must wait until a cloud moves in front of the sun so that no dark shadows will mar his photo. „Frankfurt is actually quite cool,“ he says.

Here it is actually quite cool, I think. 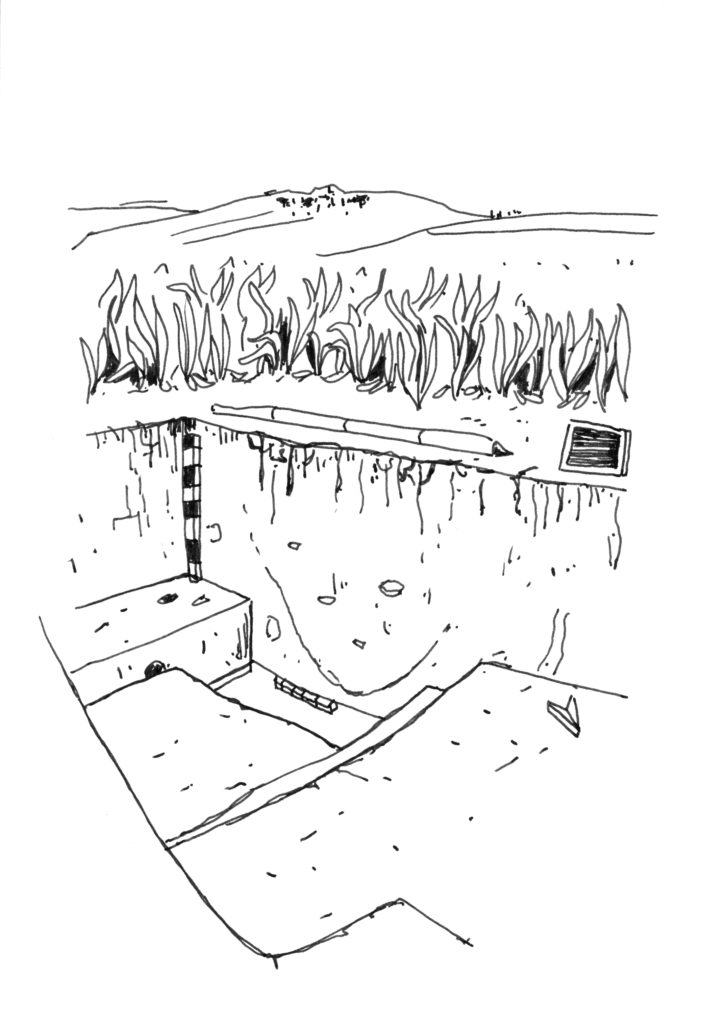