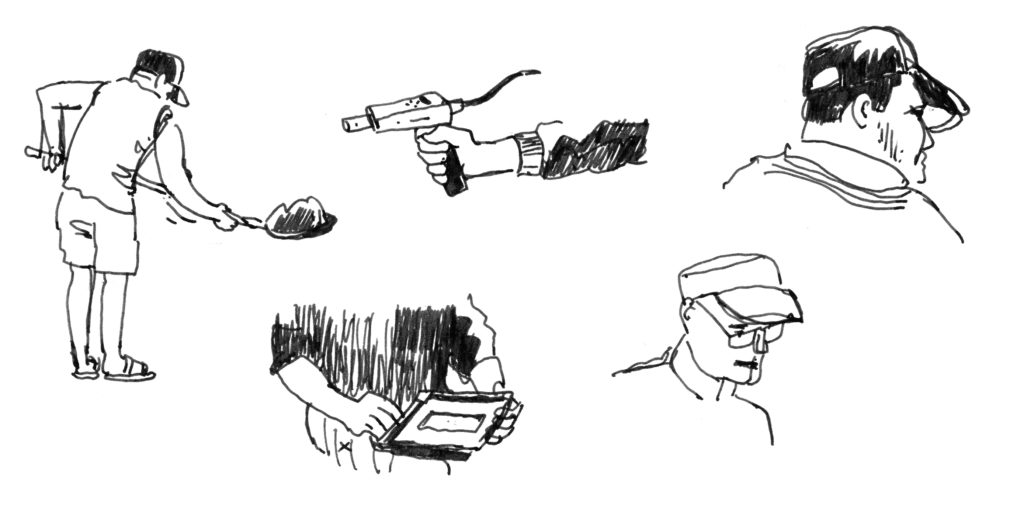 The whole morning there is a hustle and bustle around the kiln. Everyone is gathered there except for Jan and Lennart, who are working in their test pits, Andrea and Mariana, who are busy with their own trenches, and Malte, Bjarne and David, who are trying to wrangle a black tarp into a position where it throws shadow over the entire remnants of the house so Kai can take a good photo. There’s not a cloud to be seen in the sky, but a light breeze is blowing. It’s going to get hot today.

I missed one day and already, much of the archaeology-free natural soil was removed all around the kiln. The workers from the village are using spades and shovels to remove even more soil, trying to dig a ditch around and below the kiln in order to attempt to transport it away from the site in one piece. Next to me squat Andrei and Sasha, smoking and waiting until their wheelbarrow is filled and can be brought to the dirt piles.

In recent weeks, it was much quieter around the kiln. Generally, Slava was alone with the carefully uncovered clay remains. For days in the midday sun, he tinkered with the finest brushes and synthetic resins. Here brushing away a couple crumbs of earth, there fixing a wobbly spot more firmly in place. Now the base of the kiln is prepared enough that the workers can begin removing the earth that surrounds it. This base is the only part of the kiln that has survived: the part on which the fire was made and two combustion channels. Nothing is left of the dome and protective cover, only conjectures can be made about them.

In the midst of the digging workers, blasted by music on both sides, Vitali bends over the stove. Armed with a magnetic susceptibility pistol, he takes measurements every couple of centimeters. Slava guides the cable that leads from the sensor to Robert, who sits in one of the ditches with a Toughbook on his knees and reads out the results. Knut bustles in and around the trio, describing parts of the equipment. The machine is a part of his RGK (Romano-Germanic Commission) arsenal. They are measuring the magnetic susceptibility (often also lovingly referred to as “Suszi”) of the kiln, in other words its “magnitizability”. With the results, they can better interpret the geomagnetic plans that were the outcome of magnetometry surveys carried out on the site several years ago. The magnetometer measures magnetic anomalies, the deviation of features from the normal magnetic field of the Earth. These anomalies are generated through things like ceramic sherds or other (burnt) clay objects; the resulting maps therefore quite accurately show accumulations of finds. Based on size and shape, it is possible to hypothesize what structure or building the accumulations might represent.

In this concrete example, the magnetic susceptibility of the kiln is the highest at the location where the fire was made and the clay was therefore the most hardened. When you look at kiln-shaped structures on a geomagnetic map, it could thus be possible to determine where in the kiln the fire was made. This means the orientation of the kiln could be suggested without excavation. Knut looks very excited about this new finding and I also find it thrilling to experience these moments as they happen. 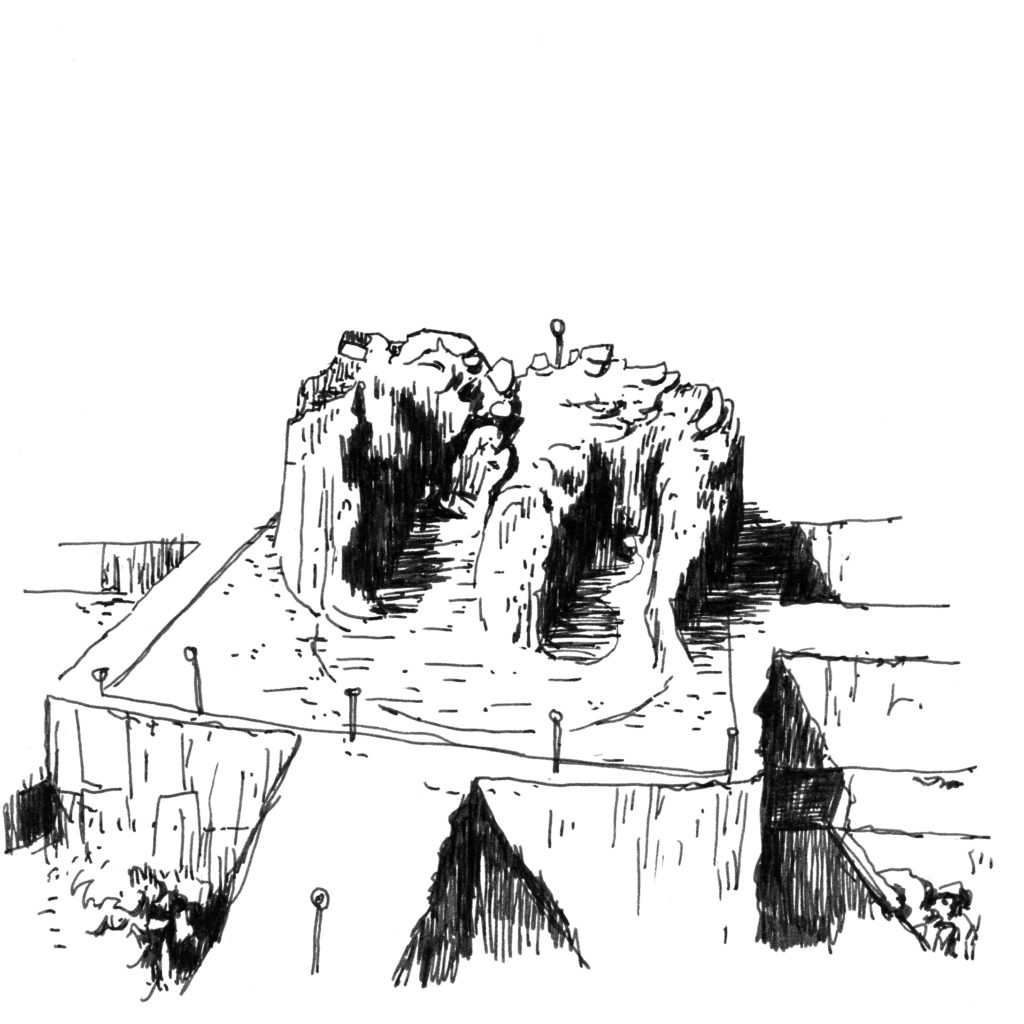 While they are measuring, Johannes tells me about the kiln. One of the foundational questions of the whole excavation, actually of all Tripolje research, can be related to this kiln, at least to a certain extent. This site is an incredibly large settlement, 25 ha large, made up of 250 houses. Other similar settlements, for example Maidanetske in the Ukraine, are larger but have comparable characteristics, such as the arrangement of the houses.

Now the big question is whether these sites can already be considered cities, or if they are merely settlements.

One can speak of cities if there were clearly recognizable specialized neighborhoods. Or rather, if several houses are discovered with evidences of specialized production.

There must have been specialists. Or at least part-time specialists. In order to operate such a two-canal-kiln, a large amount of both innovation and experience are necessary. Mind you, such a system can reach up to 2400°C, a temperature hot enough for copper metallurgy and casting. Based on the features and finds, it is unlikely things progressed this far at the site we are excavating, but in comparable settlements (like Maidanetske in the Ukraine), such practices existed. “We are in the ‘Chalcolithic’ period here, yes, with ‘ch.’ The Copper Age,” says Johannes.

In the meantime, Robert has joined us and squats on the dirt pile, cigarette in hand. The two of them seem to be neither sure of, nor in agreement about if the presence of part-time specialists is sufficient to be able to call the settlement a city.

They begin to pull some numbers out (“Your numbers are always twice as high.” “Yes, but for good reasons.”). Finally, we calculate that with 250 concurrently occupied houses, each with an inventory of 40 vessels, and 1-3 vessels needing replacement per year – between 500-1000 new vessels must have been fired annually. If we assume that 20 vessels could be produced per firing event and that each event had a failure rate of 10-50%, around 50 firing events must have occurred per year.

However, there are multiple kilns in the settlement. It is not clear if they were all in use at the same time, and thus a smaller production rate of around 5-10 firing events per year would have been more likely, or if they represent consecutive generations of intensively used kilns wherein 50 burns per year took place and kilns were only useable for a short number of years.

According to C14-dates, the settlement existed from 3950-3750 BC – 8 generations if each generation lasted approximately 25 years. If each generation collectively used a single kiln, eight kilns should be found in the settlement. It is likely that this number will be reached during future surveys. This number of kilns could also support, though, the other theory – that multiple kilns were in use at one time and each individual kiln was used less frequently.

The kiln that was uncovered last year during excavations complicates the calculation further. It was much better preserved than the one that the workers are still toiling away to remove. Nevertheless, according to Stas numerous bettermentsare visible on this kiln. This does not make anything easier; answers are likely still beyond reach, but the questions can already be asked.

The mere discovery of these kilns is a wonder, according to Johannes. You just don’t expect something like this here. Kilns of this complexity at this early date are only known in Mesopotamia in a completely different cultural context, in cities characterized by hierarchies that seem very much out of place here. So out of place that one would like to speak of an egalitarian settlement. Equality is meant here as the absence of an institutionalized, class-based society. How could such a society arise? And why was it gone within 200 years, leaving only a burnt out husk of a settlement?

Johannes must go discuss something. I organize my notes. Malte is still there and lights a Camel. He had listened in the last 20 minutes. “It’s pretty cool, that you can reconstruct so much from so little; that you can build theories like those. It’s all just a little bit of burnt clay.” 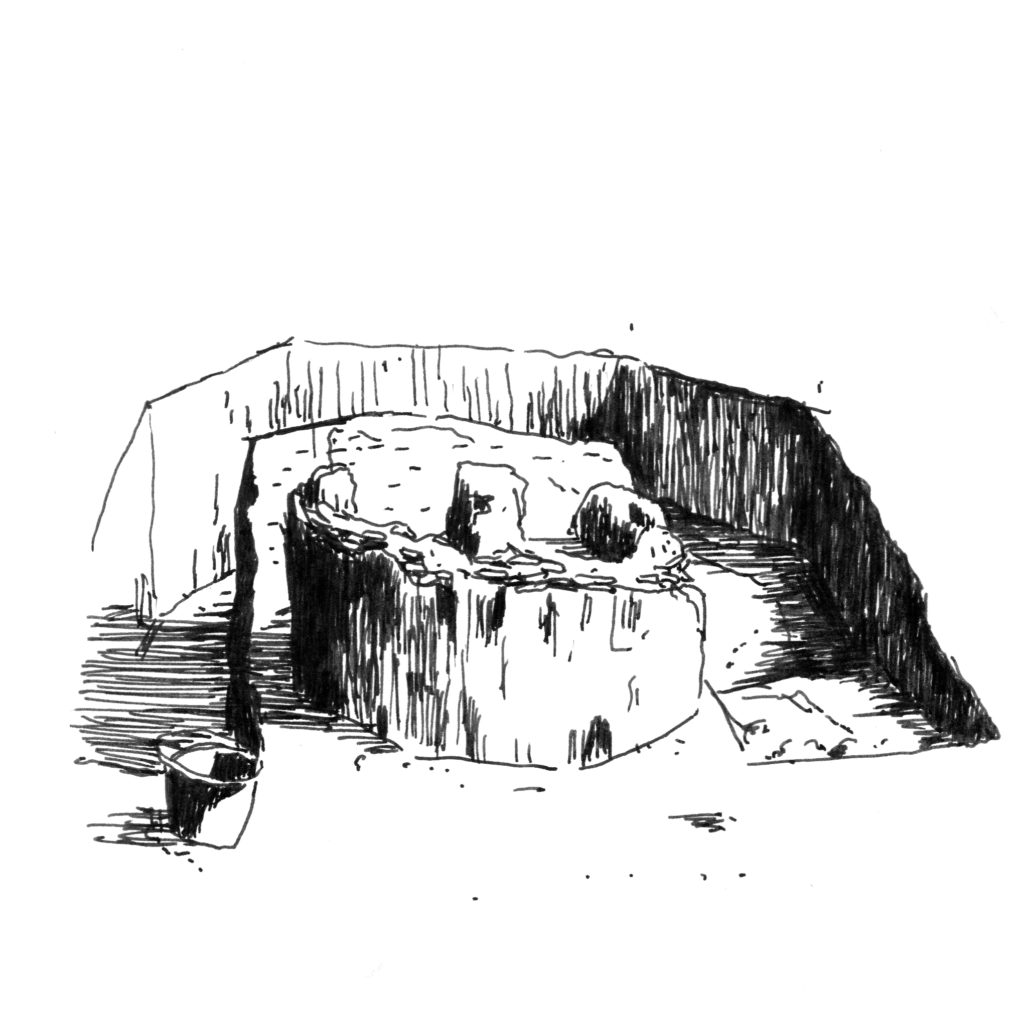