“Damn fascists. And Jonas gets so much joy from waking us up.”

We start the day full of joy. Yesterday night we partied in Magazin Mixed, sending off some of the younger guys with whom we have worked and who now have to return to school.

We hop in the car and drive off, traveling again. “Ain’t No Grave” by Johnny Cash plays as we drive by the Lenin-monument in the next town over. People wait for the bus in the next large town we drive through. Sunflowers let their ripening heads hang in the morning sun.

We unburden the next gas station of much of its snacks. There is even a coffee machine whose brew rounds out our breakfast. And there is Breiniki. I immediately buy two bags and offer their contents to the others until everything is gone.

We pass through the border to Romania (“No, we are not smuggling cigarettes.”) and are received by horse-drawn wagons and better streets. We’re on the way to Iași.

At the museum of the Alexandru-Ioan-Cuza University in Iași we are greeted by Magda Lazarovici and Doris Mischka. Two important archaeologists; one from Romania, one from Erlangen. Later we will visit their excavation. 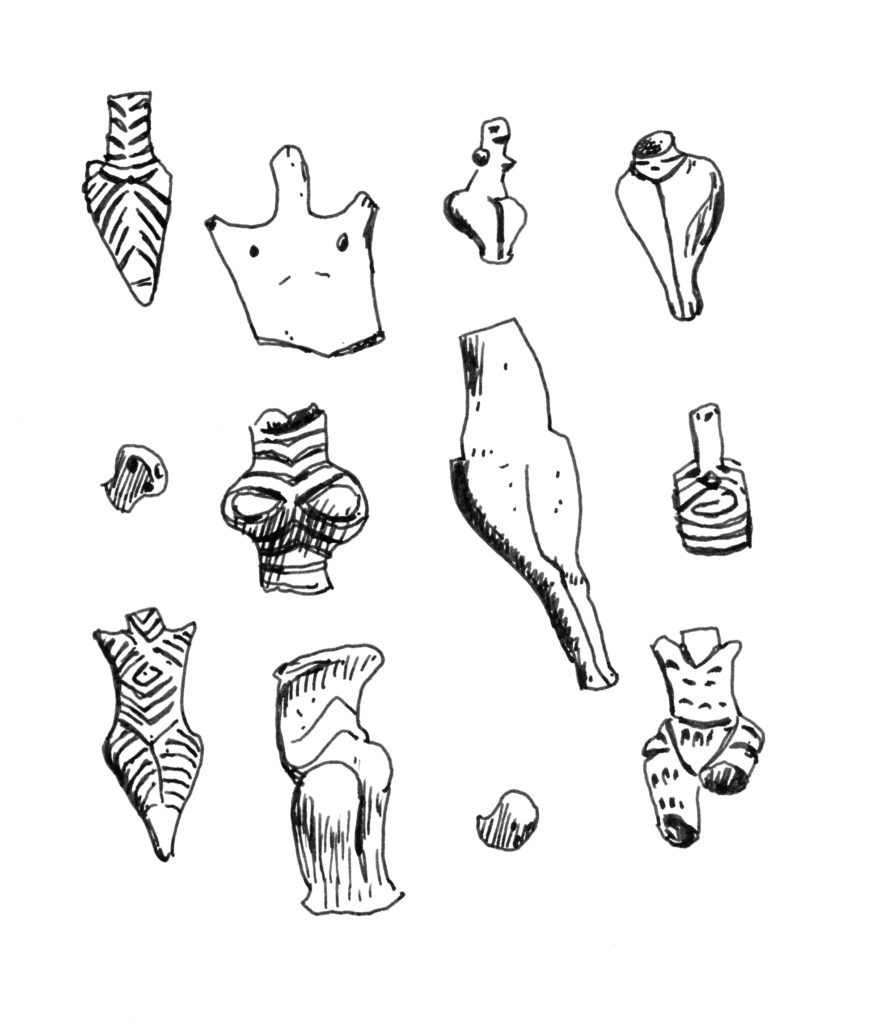 Unfortunately, we do not have much time to look around the few small, but nice rooms. What we do see, though, is spectacular: in a darkened room, a stand rotates on which a multitude of small figures (called “figurines”) are arranged in a circle. A chain of ceramic beads with a small triangle in the center, is encircled by small figures that remind one of Mensch-Ärgere-Dich-Nicht game pieces. 21 female figurines form a second circle, itself surrounded by a ring of different vessel-shaped forms. The “Pantheon of Isaiia.”

We quickly take pictures and return to the car. The museum was very nice. We liked both the exhibits and the building. After three weeks of excavation and small-town life, we found the shining stone floors, air-conditioning, and quiet, classical background music very comfortable.

(As he follows the other cars through the city, Lennart tells us that the classification of the statuettes as “legless figurines” is really a matter of perspective. Depending on how you turn them, they look like either a phallus or a curvaceous female body. He finds this very amusing.)

At the Complexul Museal Naţional Moldova Iaşi in the Palatul Culturii we are greeted with coffee in an office. Doris Mischka shows us finds from her excavation then gives them over to the care of the museum. We take a tour in the related exhibitions.

Many of the exhibits are filled with material from Scânteia, the settlement where Doris Mischka is excavating this summer. The site is several centuries older than „ours;“ chronologically, it is defined as „Cucuteni A3“ – we are excavating „Tripolje AB.“

„Cucuteni“ and „Tripolje“ actually belong to the same time period. The distinction comes from different sites in different countries with different histories of research. Both periods are further divided by letters and numbers.

What makes the Scânteia settlement so interesting is, among other things, its position in the landscape. Typically such sites were located on spurs, built on a jutting mountain ridge and closed off on the remaining side by a ditch. Here, the settlement was laid out in a rectangular plan, largely ignoring its position in the terrain. Doris shows us an elevation model on one of the information panels. Due to the slope, the area was not plowed and the house is quite well preserved. 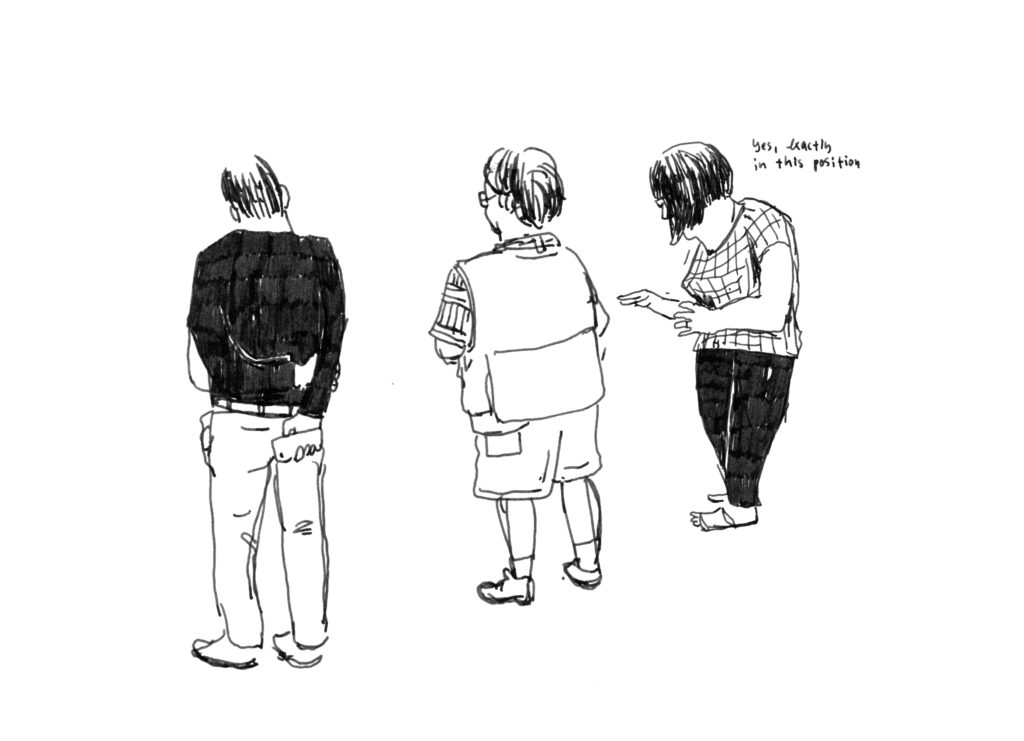 We continue looking through the exhibitions. Malte finds vessels which he unambiguously identifies as schnapps glasses. Bjarne thinks that an altar-vessel sometimes is just a vessel that has been turned upside down and interpreted with much imagination until it became cultic.

We leave the museum and make our way to the excavation of Doris Mischka and Magda Lazarovici.

One Spielgel-Affäre later we arrive at the school of the small town of Scanteia. This is where the excavation team is staying. There is a great meal, complete with chicken that wasn’t just even steamed, but fried and seasoned. After Gheorge Lazarovici, another important Romanian archaeologist, plies us with thermoses of coffee, we are shown the rest of the accomodations and, finally, the excavation.

Now we see what was previously described in the museum. The terrain, the hearths, the different house sectors, diverse installations (Gheorge names them „clay caskets“) and the postholes which finally appeared after numerous rounds of misting. Like with „our“ settlement, main questions include the presence of two-storey buildings and, of course, more generally the method of building and form of architecture. 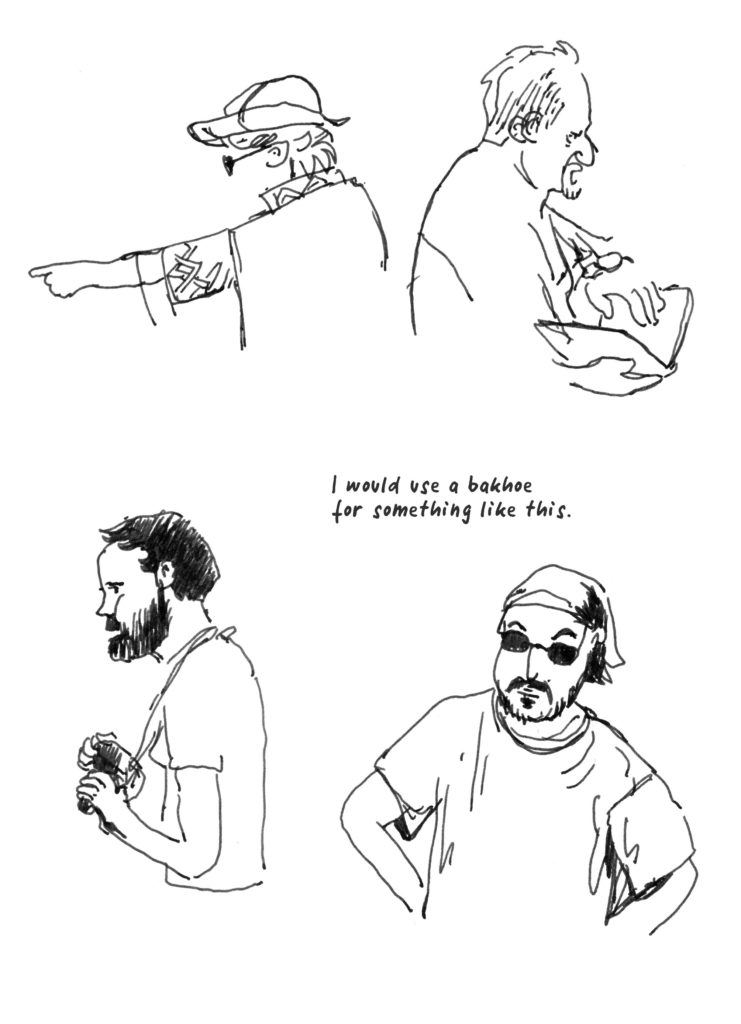 At this site it is even hotter than on ours. Sometimes they already begin working at 5am in order to avoid the midday heat. They are almost done – only four days left. Then, at least the students, are returning home. Magda and Gheorge  Lazarovici are staying. This settlement has become their life’s work. 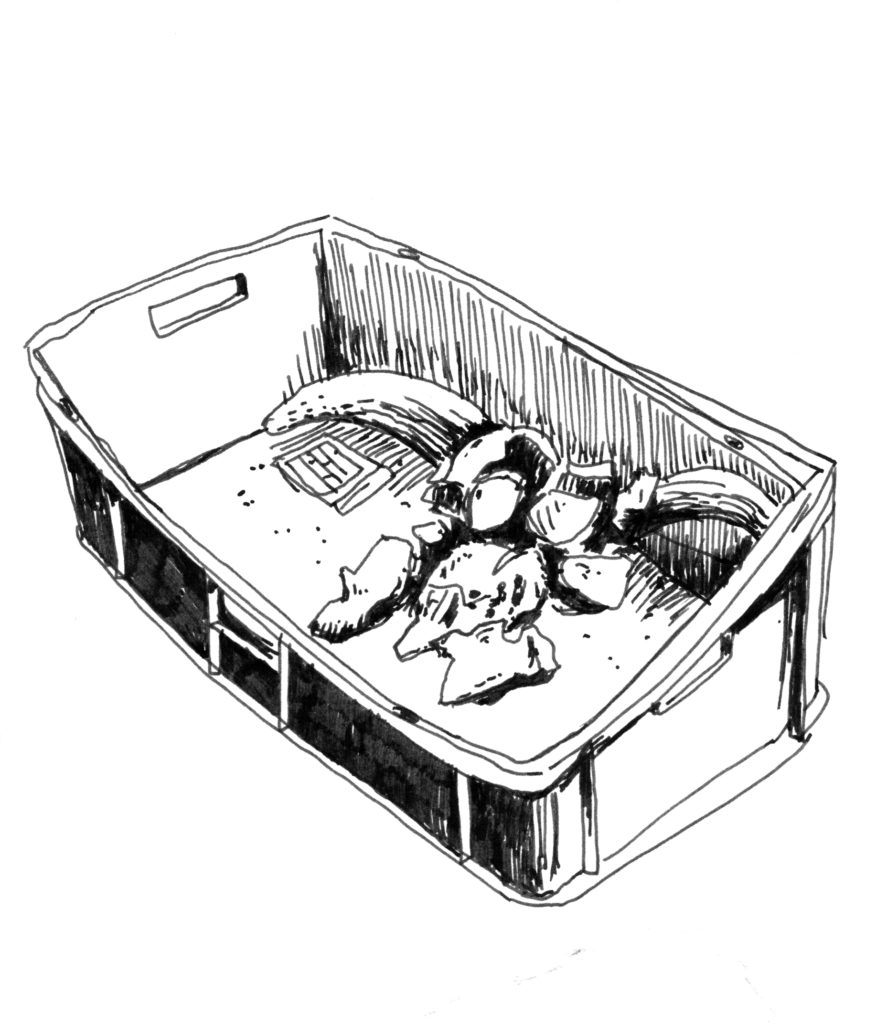 When we arrive at the accommodations, everything is already prepared for a night of grilling. David is asked if he is even an archaeologists after he turns down a schnapps. “Yes, of course. Well, alright.” Strong, but quite tasty. Svetlana tests if the schnapps can burn. It does. Quite cleanly, no blue in the flame.

There are not enough glasses. No problem, Karsten cuts several beer cans and folds over the sharp edges. “Glasses are for people who have no knife,” that’s at least what people say in Maramuresh, he tells us.

The meat is placed on the grill. The trowel is a multi-purpose tool; sharp enough to cut through the packaging, wieldy enough to flip the meat.

As the last meat is removed from the grill, the Indiana Jones theme coincidentally begins to play. We eat.

At this point I want to thank the Scânteia team for the museum tour, the hospitality, and the wonderful evening!

Early the next afternoon we approach Chişinau. During the last 50 kilometers, more and more people sit along the side of the road, sometimes in small groups, sometimes alone. They sell fruit and vegetables – in front of them stand buckets full of currants, eggplant, peppers, and cobs of corn.

As we enter the city, I wake David. Sycamores that have already begun to turn yellow line the multilane roads. Not long until the traffic gets heavier. Today is Independence Day; in the city center there will be a celebration. I find it nice to be in a real city. Eventually we find a parking spot across from the Muzeul Național de Istorie. Mila glances around and lights a cigarette – no police in the vicinity.

Mariana picks us up at a side entrance to the museum and leads us through the back courtyard, past discarded fair wagons and workshops, down a flight of stairs into the large basement. After the heat of the car, it is comfortably cool down here. Metal shelves full of wood and metal crates stretch in all directions; at the edges, a couple work stations. Here is where the archaeologists spend their winter, working with the sherds that they excavate during the summer. 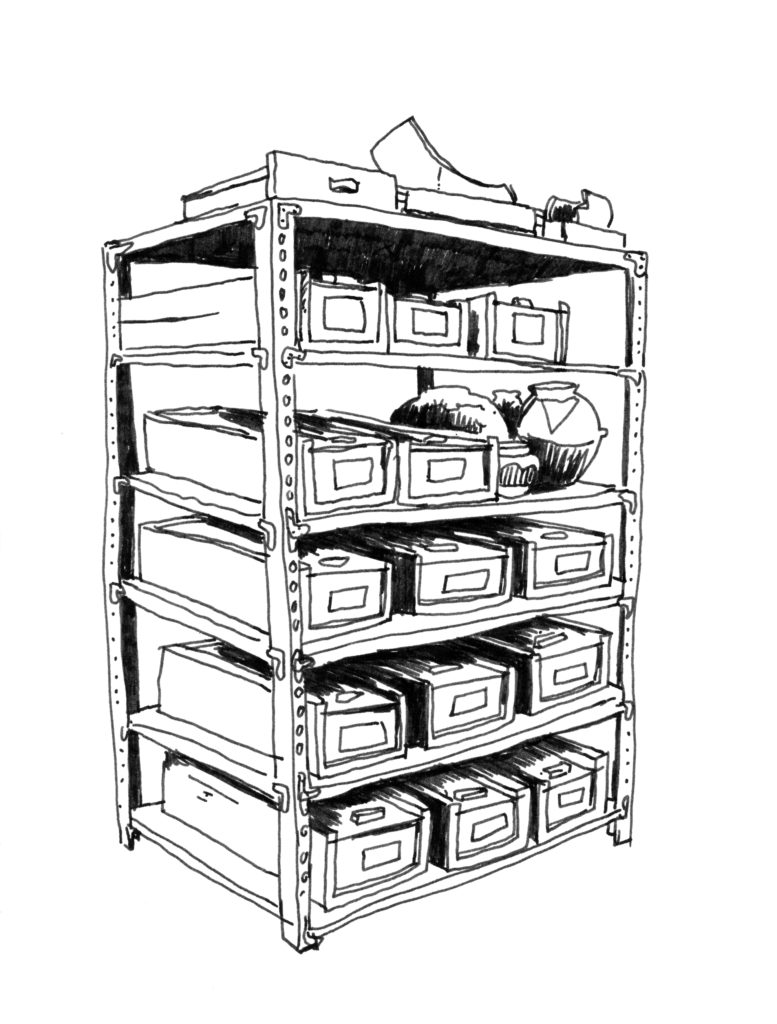 Mariana shows us the shelf with the finds from last year, when Stolniceni was also excavated. Here is where it all comes. Soon there will also be a shelf filled with crates labeled „Stolniceni 2017.“

We spend the rest of the day eating across from the museum and seeing the city with Mariana. She shows us the Parliament building, shaped like an open book. No other building in the city is allowed to be taller than the parliament, says Malte. Across from it is the tower of the Prime Minister. A little bit farther on is the square place where Independence is being celebrated, surrounded by small stands with souvenirs and trinkets. A lovely city; with 500,000 inhabitants quite small, but still nice.

While some of us are already on the way back, we drink another beer. “Only ten more days of excavation,” we notice. The time has passed so quickly.