The soyfield has turned yellow, only splashes of climbing weeds remain green.The sky is more often gray and rainshowers have become more frequent. The nights and mornings are getting cooler, it can be felt that the days of summer are numbered. We are also not staying much longer; tomorrow, Friday, we are returning. Then it will be peaceful again here.

Our teammates from Moldavia, Romania, and the Ukraine will stay at least another week, the geophysics PhD candidates and several workers from the Romano-Germanic Commision as well. Soon, though, it will also be time for them to return to their homes.

Before we leave, there are several things to do and naturally these last days, like all excavations, are a little hectic. „It always takes as long to complete a job as you have time for it,“ says Lennart. His test trenches have to be done today, Jan’s also. Mariana has more time for her’s as she is leaving later.

These three test trenches were „opened“ almost three weeks ago mainly to retrieve datable material, generally bones, from different parts of the settlement. With these dates it will then be possible to determine whether the different rings and sections of the settlement were occupied contemporaneously or if they existed one after the other. Were more rings of houses built around an inner, older ring? Or was the settlement planned and built in rings from the beginning? Lennart says that it is the second variation. As soon as the C14-dating of the bones is complete, it will be much more certain.

„Test trenches are great because you only excavate part of a structure and can still find out what you want.“ Marta and Lennart count off other positive side effects of test trenches. The ceramics that are found in them can be dated more precisely with the help of the bones, helping the catalogue of information continuously grow. Furthermore, test trenches offer the opportunity to excavate contexts that have not yet received much attention; for example, ditch-house-complexes, like that in Mariana’s trench, that might contain interesting finds. Lennart sees the pits as evidence of material resource extraction for the houses, supplying things like clay for the plastering the walls. Inside these pits sherds and bones are often found as well as the remains of older, destroyed houses which were then dumped to make place for the new.

Lennart is excavating a context that until now has seldom been dealt with – the space between two houses. His trench, at 13 meters, is rather too long to be a test trench, but thus contains a part of a house on each end and some sort of activity or working area between. „Maybe even with an unburnt clay floor,“ he thinks. Interesting!

Jan‘s trench, to the right, that was supposed to just supply datable material, also turned out to be very interesting: after the plowing horizon was removed, a layer of ceramics was uncovered with lightly-colored burned daub beneath – the remains of an installation. Before this layer can be removed, everything is documented: photos for photogrammetry (the pictures will be rectified with the help of measured points) and for „structure for motion“ (a program that automatically generates a 3D-model).

Then it will be drawn. At least until yesterday, today there is no more time. Inbetween all this, the position of single finds is measured with the total station and botanic samples are taken. The test trenches are important for the botanists as they can compare the material collected here with material from the main trenches. 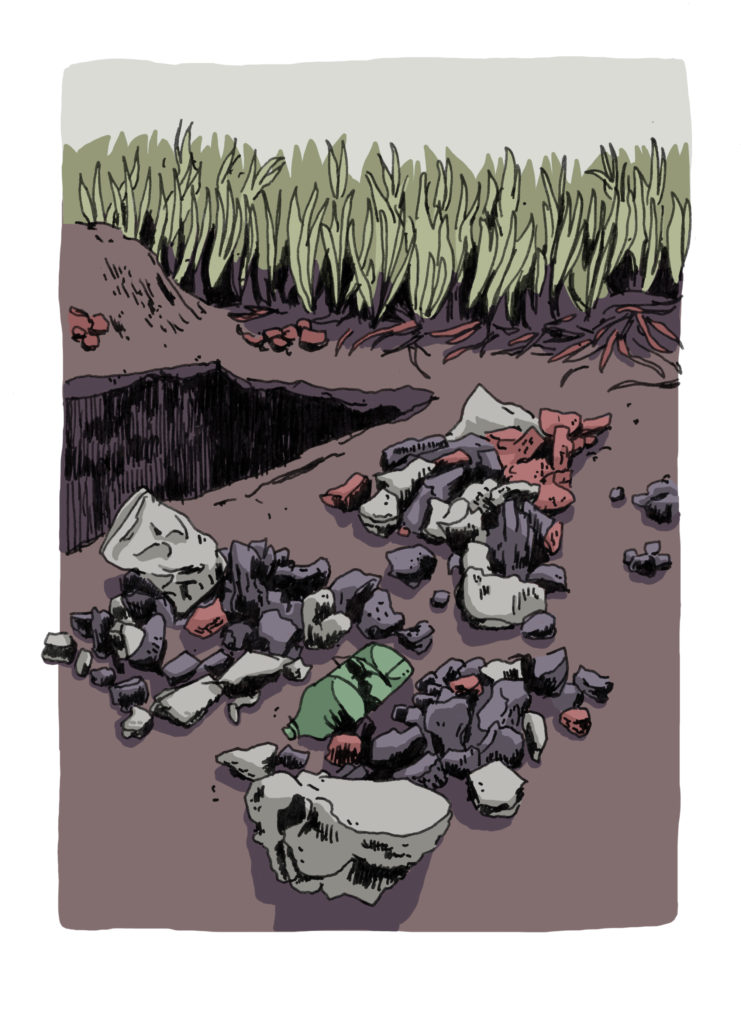 After Jan removes the underlying floor (of course, also of burnt daub), more ceramics appear. „Very complex,“ says Jan. „Everyone says something different about it.“ Some say it is clearly an example of a two-storey building, others recognize a destructive event and discuss sagging and tilting. Bjarne thinks that the lowest layer could also be the remnants of an older house that was burned down to make place for a new one. Jan hears the theory for the third time. Now, though, he looks for a spade to clean the profiles. First the trench has to be finished, afterwards one can always think through the different theories.